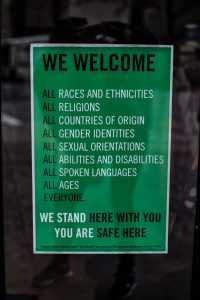 Our October dialogue will be about “Political Correctness”. From Wikipedia:

The term political correctness (adjectivally: politically correct; commonly abbreviated to PC or P.C.) is used to describe language, policies, or measures that are intended to avoid offense or disadvantage to members of particular groups in society. Since the late 1980s, the term has come to refer to avoiding language or behavior that can be seen as excluding, marginalizing, or insulting groups of people considered disadvantaged or discriminated against, especially groups defined by sex or race. In public discourse and the media, it is generally used as a pejorative, implying that these policies are excessive …The contemporary pejorative usage of the term emerged from conservative criticism of the New Left in the late 20th century. … Commentators on the political left contend that conservatives use the concept of political correctness to downplay and divert attention from substantively discriminatory behavior against disadvantaged groups.] They also argue that the political right enforces its own forms of political correctness to suppress criticism of its favored constituencies and ideologies. The term has played a major role in the United States culture war between liberals and conservatives.

Join us to listen to what others think and to share what you think.  The Religious Exploration Salon is a group that meets 3rd Sundays to discuss various topics in the format called Bohm Dialogue which emphasizes respectful listening and balanced, synergistic sharing. For more details about how Dialogue works, please see this intro.

Everyone is welcome. You are welcome to think about the topic beforehand but no preparation is required or expected — come as you are with whatever thoughts/intuitions you have, ready to listen, learn and contribute.  We next meet Sunday October 21 at 7pm in the Brackett Room.