All who are interested are welcome to come on 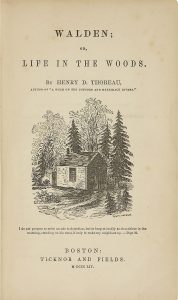 Saturday, Dec 21 at 10am when the Spirituality Book Group is meeting to discuss Walden by Henry David Thoreau. From Wikipedia:

There has been much guessing as to why Thoreau went to the pond. E. B. White stated on this note, “Henry went forth to battle when he took to the woods, and Walden is the report of a man torn by two powerful and opposing drives—the desire to enjoy the world and the urge to set the world straight”, while Leo Marx noted that Thoreau’s stay at Walden Pond was an experiment based on his teacher Emerson’s “method of nature” and that it was a “report of an experiment in transcendental pastorialism”.

Likewise others have assumed Thoreau’s intentions during his time at Walden Pond was “to conduct an experiment: Could he survive, possibly even thrive, by stripping away all superfluous luxuries, living a plain, simple life in radically reduced conditions?” He thought of it as an experiment in “home economics”. Although Thoreau went to Walden to escape what he considered, “over-civilization”, and in search of the “raw” and “savage delight” of the wilderness, he also spent considerable amounts of his time reading and writing. …

After Walden’s publication, Thoreau saw his time at Walden as nothing more than an experiment. He never took seriously “the idea that he could truly isolate himself from others”. Without resolution, Thoreau used “his retreat to the woods as a way of framing a reflection on both what ails men and women in their contemporary condition and what might provide relief”.

To see some of our past readings click here.