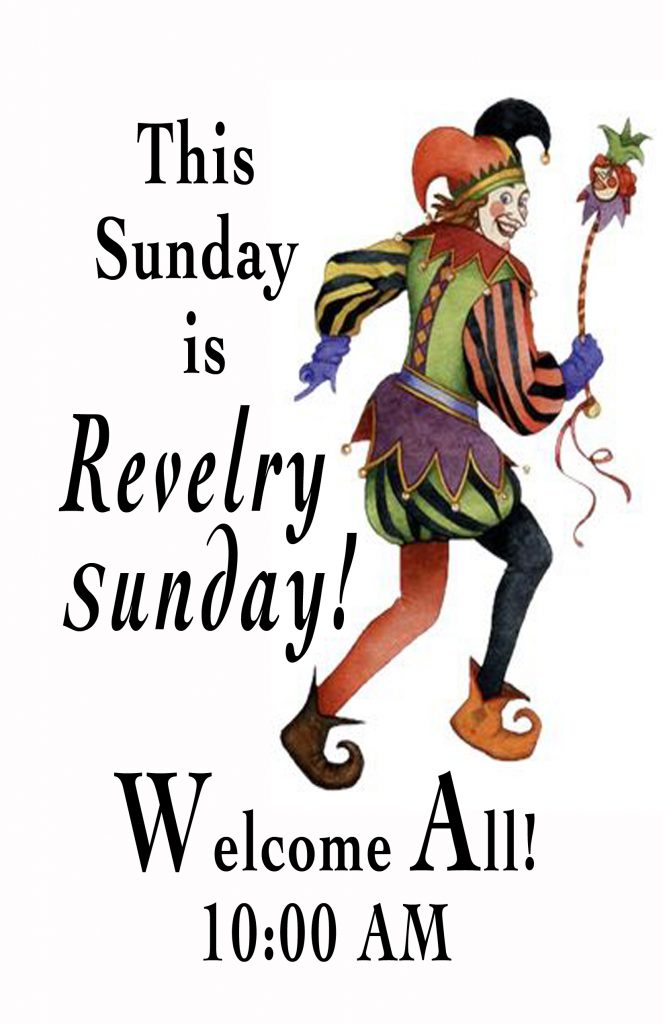 First Parish of Sudbury invites the community to its Revelry Sunday Service on December 8, 2019, at 10 am. The service, which honors earth-centered traditions, will be filled with dancing, reveling, and the reenactment of ancient rituals originally designed to bring back the sun and ensure the rebirth of the natural world, at this time of year when we experience the longest night.

The service will be filled with music and dance by both the youth and senior youth Morris dance groups and First Parish Choir, and the congregation is welcome to join in the music.

The time of the year around the Winter Solstice is rich in Rituals and Traditions, many of which are quite old. Today we celebrate our 30th First Parish Sudbury Revelry service, begun here by Tom Kruskal and his children’s Hop Brook Morris team back in 1990. It was in turn an offshoot of the annual Cambridge Christmas Revels first performed at Harvard’s Sanders Theater in 1971. This year, after several years of creative innovations involving Greek gods, rock music and such, we are going back to the basic old English traditions, to better remember where this all comes from.

The elements of tradition are rituals. The four candlesticks today were also created in 1990 for use in Earth Centered rituals performed here most years, and are rooted in pagan traditions going back into the 1800s.

The Horn Dance we just witnessed is from the village of Abbotts Bromley in Staffordshire England where it is performed each year. The antlers they use have been carbon dated to the 11th century and it is speculated that the dance in some form originated there in pagan, Anglo-Saxon times. The term “Morris Dancing” only dates back to the 15th century but dances of this sort seem to be much older.

The word Wassail comes from an Anglo-Saxon greeting meaning “be in good health”. Wassailing is an old tradition connected with Mummers Plays such as ours today, which were first mentioned in 1296. The Boar’s Head Carol we will sing next dates to the 15th century and also has ancient Anglo-Saxon roots.

So point made, this stuff is very old. Why do we still do them? These rituals have been passed down through many hands from generation to generation, smoothed and honed by endless repetition into forms that somehow resonate with who we are as human beings and children of Earth. They are therefore beautiful. And in a time like ours where so much changes so quickly, they reconnect us to our past and to our deep human roots and, Fates willing, to a long, bright future.

But enough record quoting and theory, Let the rituals speak for themselves!